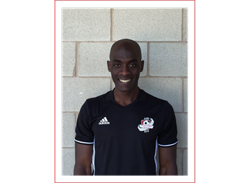 Evolution SC is delighted to announce the acquisition of Bunnyray Larmond as the new Technical Director. Bunnyray has over 15 years of coaching experience at various levels.  He has been a part of the Ohio South ODP coaching staff, coached MRL premier division teams, and State Cup champions.

Coach Bunny will oversee all player and coaching development to help shape the club's culture and lead us into the new phase of club development and growth. By appointing Coach Bunny, we are taking the next step in our efforts to establish Evolution SC as the elite program in the area and continue to provide all of our players with the best program and experience possible.

Personal Bio:  Bunnyray grew up and played his youth soccer in Jamaica.  At 16 he was invited to the Jamaica National U17 training camp and the following year received a full scholarship to Wright State University (WSU).  At WSU, he was the team captain during his last 2 years and received a number of awards throughout career:  Most valuable player, All-Conference first team, All-Ohio second team, All-Academic team and Academic All-Ohio Honorable Mention.  He also completed a Bachelor of Science and Master of Science degree in Mechanical Engineering.  After collegiate soccer, he played in the Premier Developmental League for the Dayton Gemini team.