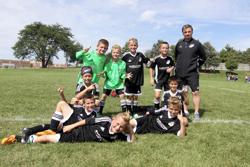 Labor Day Weekend 2016. Week 4 of pre-season tournaments with Evolution teams scattering to various tournaments. Evolution well represented at the Chicago Shootout tournament based in Naperville taking 7 teams to compete during the weekend, with 6 of the 7 teams competing in the top bracket.

Evolution came out of the tournament with two champions & two finalists!!! All of the teams did the club very proud and we're delighted to not only compete but also be successful against high level opponents!!